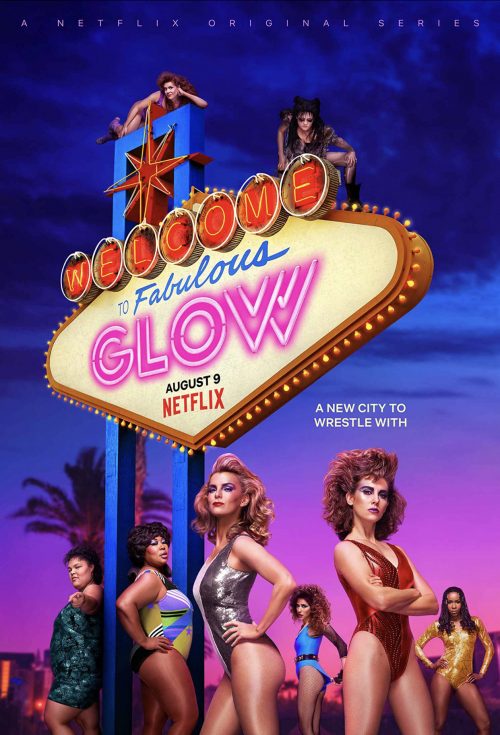 The Glorious Ladies of Wrestling are back! And this time, they’re doing it live in Vegas. The women are living together in the Fan-Tan, an off-Strip hotel and casino – the perfect excuse for one-nights stands with hot valets. They’re out of inspiration and this is affecting their performances on stage. Season 3 starts fresh and there’s a lot going on. Are you ready to rumble?

GLOW has been booked for another couple of months and since the show is mostly the same every night, these ladies can focus more on their daily life. Sheila (Gayle Rankin) takes an acting class, Cherry (Sydelle Noel) is trying to get pregnant with husband Keith (Bashir Salahuddin), newlyweds Bash (Chris Lowell) and Rhonda (Kate Nash) are having some honeymoon difficulties and Sam (Marc Maron) is working on a new movie script. We also get introduced to a couple new characters. First up is Sandy Devereaux St. Clair (Geena Davis) who runs The Fan-Tan. Davis is clearly having a great time and has a few surprises up her sleeve. Another new character is dragqueen Bobby (Kevin Cahoon) who inspires a few of our ladies to step outside of their “comfort zone”.

This new season flies by. It’s fun and entertaining like the second season, but it’s more character focused than the previous seasons. While I thought the first season was a bit of a chore to get through, the second one was very enjoyable. This new setting and focus on the characters flips the tables once again and although I feel they missed a few marks on more of the ensemble work they had going on in the second season, I can confidently say this was my favourite season so far. Creators Carly Mensch and Liz Flahive try something different and it shows through their writing. There are scenes that are very experimental and genuine surprises to witness in a show that’s been going for three seasons. They tackle some racial discussions with Jenny (Ellen Wong) and focus more on Yolanda (Shakira Barrera) and Arthie’s (Sunita Mani) developing relationship.

Season three also feels more human and the emotions run high at times. It discusses topics that were taboo in the ’80s, especially when there wasn’t a way to show this on television. Some of these subjects are still very relevant in 2019. GLOW is a show about female wrestlers and their bodies are being shown on screen in front of an audience, women come in different sizes and shapes. These actors perform their own stunts in front of the camera and season 3 makes the way women get judged on appearances, a key plot arc. There is a lot more nudity than what we’ve seen so far, and this isn’t just shown in a sexual way. I felt like it was very tasteful and artistic how these characters embarrass themselves in front of each other or are just casually walking around naked in between wrestling matches.

The acting is on another level. Betty Gilpin, just nominated for an Emmy for season two, is marvellous. She struggles as a divorced mom juggling a professional career and trying to be closer to her son, being so far away from him. You can tell the cast have embraced these characters they play and do it so naturally, it almost seems as if you’re watching real footage of the original Glorious Ladies of Wrestling.

The spotlights in the ring might hide the struggle these ladies are going through, but GLOW Season Three is top shelf glorious that never stops sparkling.

GLOW Season 3 is streaming on Netflix from Friday, August 9.