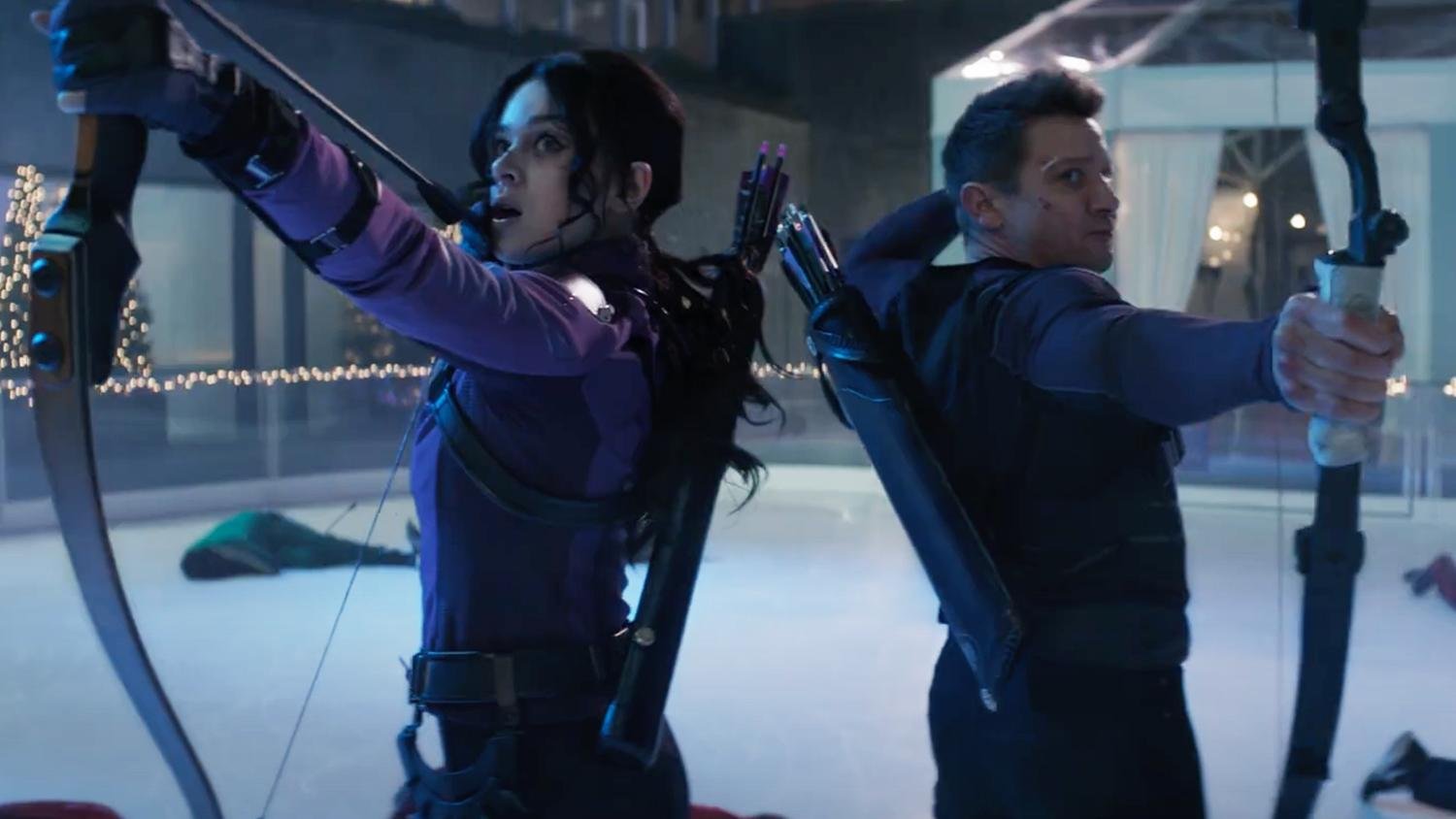 Coming in as the 4th (and final) Disney+/MCU series for 2021, Hawkeye is bringing the Marvel tone back to it’s Phase 1 roots with an entertaining, grounder and lighthearted adventure following the slick, agile, deadly-with-a-bow-and-arrow soldier, Clint Barton (Jeremy Renner). Or, as he’s better known to MCU fans as… Ronin… I’m kidding, I know he’ll always be Hawkeye to you (even if I think Ronin is a cooler character).

Taking place a few years after the events of Avengers: Endgame, this series follows Hawkeye as he navigates life after being an Avenger. Now with hearing aids due to decades of exposure to explosions, gunfire and world-ending sort of sounds, Hawkeye just wants to lead a normal life with his family. While on a Thanksgiving trip to New York City with his children to see the latest Broadway smash-hit musical, Rogers: The Musical – a touching ode to the great Captain America and the Avengers who saved New York City in 2012 – a mysterious figure now dons his former Ronin costume and is being hunted down by the gangs who want Ronin dead. Hesitant and annoyed, Hawkeye decides to pursue this new vigilante to find out their identity. But that is not where the story begins…

In 2012, a young Kate Bishop watches on from her families luxurious New York apartment as the rest of the city is destroyed by the Chitauri invasion. As alien spaceships crash around her, but, in the midst of the explosions, Kate notices someone in the distance fighting the invasion off… with a bow and arrow. Inspired by the heroic acts of Hawkeye, Kate devotes her life to learning the way of the bow (with some martial arts for good measure). In the present day, a high-stakes robbery at a private, upper-class auction leads a now 22-year-old Kate Bishop (Hailee Steinfeld) to find the once lost suit of Ronin, and uses it to pursue those who have stolen an incredibly valuable item… Ronin’s sword. It is also worth mentioning, that along her travels, Kate befriends a goddamn adorable, one-eyed, pizza-loving dog named Lucky, that will undoubtedly be the MVP of the show because he is a good boy. Anyway, back to the review…

By virtue of it’s title, you wouldn’t be remised in thinking Hawkeye was about, well, Hawkeye. And while he’s definitely a large portion of the show, the story itself centres around the establishment of Kate Bishop within the MCU. Hawkeye is a perfect vehicle for this though as these first two episodes showcase fantastic chemistry and humour from both Renner and Steinfeld. Each funny line, timed to the well-adjusted ‘MCU’ style of comedy, assists with creating an incredibly likeable addition to this franchise. Steinfeld is charismatic as hell in every scene, playing a sometime goofy, but always endearing young adult who doesn’t understand how deep down the rabbit hole of villains that she’s about to go. However, it’s not just Steinfeld’s front-and-centre comedy that steals the show, but in the emotional moments, she once again shows that range seen in performances akin to Nadine in The Edge of Seventeen.

Jeremy Renner has really come into his own as Clint Barton, and with Kate Bishop taking the reigns for these first two episodes, allows Renner to examine the human side of Hawkeye. Moments in the first episode in which Hawkeye struggles with the loss of his friend, Black Widow, or his over-zealous parenting to make up for lost time with his kids, really show a side of Barton where his past has caught up with him now that the world is (presumably) safe. Renner’s ability to hone in on those dramatic elements do create a nice break from the humour and action, however, seeing a similar storyline like this at it’s genesis (then subsequently dropped until the final episode) for Bucky, does have me concerned that Barton’s internal pain won’t be addressed again. But, here’s to hoping I am proven wrong!

Both Renner and Steinfeld get to flex the physical abilities within the first episode, with two back-to-back action scenes that involve an exciting amount of close-quarter, hand-to-hand combat in which Kate Bishop is flawlessly annihilating goons and henchman like it’s no big deal. And the use of the bow-and-arrow combat (whether it’s in-camera or CGI) is very creative and entertainingly jaw-dropping. The differentiating factors between both Hawkeye’s and Bishop’s styles of fighting also add a fun flare to the action scenes. Bishop’s graceful, dance-like way of combat highlights Hawkeye’s brutal heavy hitting style, and vice versa. The action feels refreshing within the MCU, as we aren’t seeing superhuman’s use their overpowered abilities to conquer evil. This almost John Wick-esque style of action is always exciting and a nice change of pace.

The first two episodes lays a solid foundation of the fun that this series could offer. The villains are introduced in the classic Marvel way (in a couple of seconds long shot at the end of episode two), but using the 2 hours to establish Kate Bishop as a very likeable protagonist, and the relationship that will continue to grow with veteran fan favourite, Hawkeye. The more grounded approach to the story, action and humour will have most fans relishing and reliving the memories of Phase 1 MCU, as this series seemingly will play as a swan song to that beloved era, as we usher in the galactic/multiverse vibe.

Previous article
Trailer – DC League of Super-Pets
Next article
Review – The Beatles : Get Back