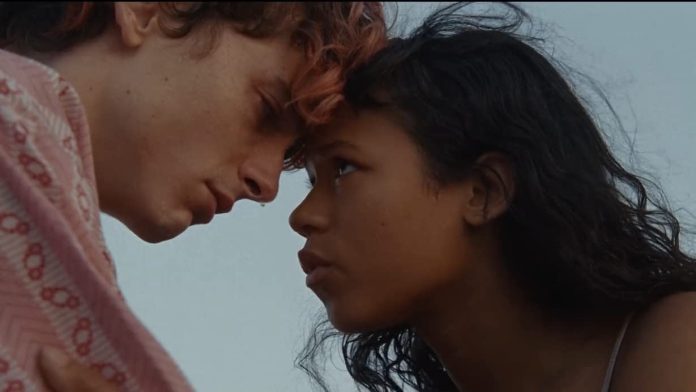 Director Luca Guadagnino is one of the most prolific and cinephile-attracting filmmakers working today. His ability to manipulate any genre to facilitate his ambitious storytelling is a testament to his status as one of the best directors working today. He is unafraid of what subject matter is explored within the worlds he creates, whether it be a coming-of-age gay romance in Call Me By Your Name, a brutal coven of witches in his remake of Suspiria, or gender identity in his HBO series We Are Who We Are.

The ultimate thread that Guadagnino weaves into all his films is genuine human stories, full of authentic emotion and grounded characters, no matter how unbelievable events may become. Which is why he was the perfect director for Bones And All, an adaptation of Camille DeAngelis’ novel of the same name, which at it’s core is a love story (the human aspect) about two outsiders with cannibalistic tendencies (the ambitious subject matter). 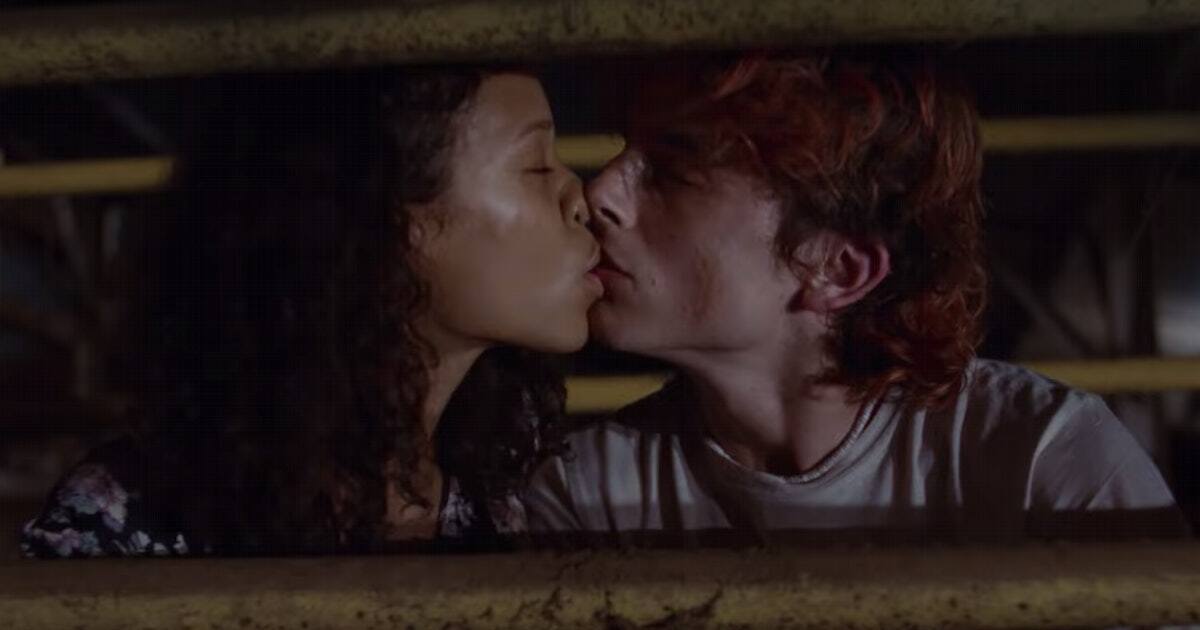 Maren (Taylor Russell) is a teenager living in a social isolation, forced by her father, but unexplained as to why for the audience. Maren is allowed to attend school, but she must immediately return home and is locked in her room nightly. Struggling to connect with people, and dealing with the abandonment from her mother, Maren leaps at the opportunity to attend a sleepover at one of the local popular girls’ houses. Sneaking out of her confinement, Maren’s desire for connection is soon revealed to be a desire for flesh when she attacks one of the girls at the sleepover by biting her finger off.

Frightened and unsure what to do, she races home where it’s revealed that her father is somewhat prepared for this situation, demanding Maren to pack her bags so they can escape before any police arrive. When Maren awakens the next morning, her father is unable to be found, leaving behind a small sum of cash and a tape recording explaining that he can no longer look after Maren due to her cannibalistic outbursts.

Now alone in the world, with an ever-growing urge inside of her that she doesn’t know how to control, Maren takes of across the country to outrun her past. Along the way, she meets Lee (Timothee Chalamet), a fellow ‘eater’ who strikes up a friendship with Maren, offering his years of experiences honing his tendencies to help Maren understand hers. 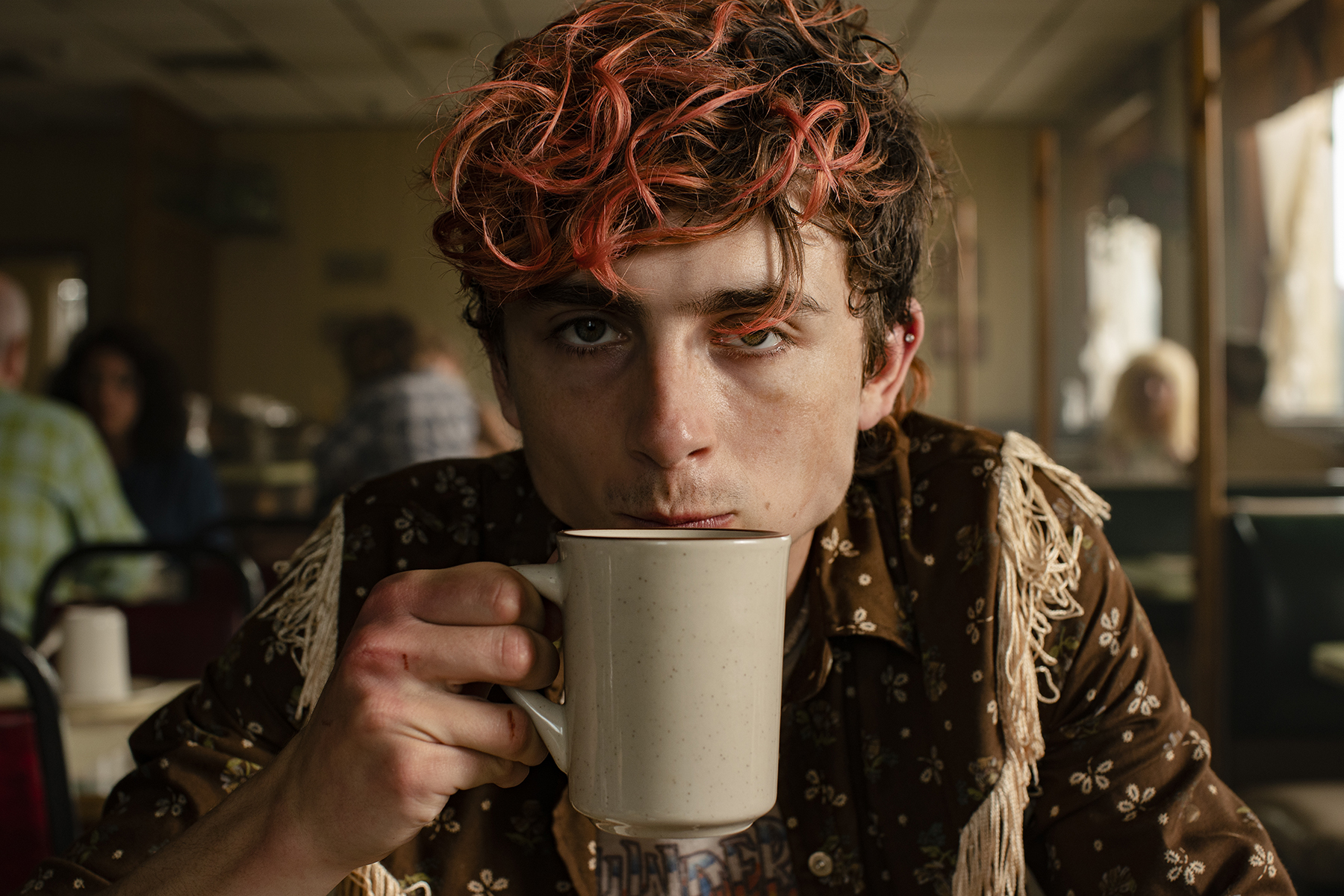 The trickiest obstacle Bones and All faces, which is something audiences may find an issue with before even watching the film, is how do you make a story that deals with cannibalism in a very graphic way, but have it also be an engaging love story. In short, Guadagnino pulls it off with ease. The fact that the story is as beautiful and emotionally engaging as it is, with characters that feel grounded and filled with substance, while having such a threatening and squeamish undertone is a testament to the source material, and Guagagdino’s ability to bring that to life.

The reason the cannibalism works is because the world in which the story is set, fully dedicates to the rules and nuances that are required to make it real. The ‘eaters’ that Maren meets throughout the film all describe the feelings and urges of their cannibalism as something that they’ve always have known they’ve had since birth, but never understood what it was until later in life. The allegories that can be drawn to discovering things like identity or sexuality are what makes this extreme plot device so relatable. The ‘eaters’ are eating because they have such an innate and visceral, deep-rooted desire too, not because they are monsters who stalk prey by night.

And with the grounded realism that comes with the portrayal of eating people on screen, comes the gore. Guadagnino does not hold back in scenes that will undoubtedly get under your skin, which seems like the intention. In a pop-culture that’s been inundated with zombies and aliens devouring humans, there is something oddly refreshing (albeit at times, incredibly difficult to watch) humans eating humans like they would eat chicken off a bone. It never feels silly or over the top, it’s done with such care. Something that could only have occurred with actors who are really dedicated to their characters, and the premise itself. 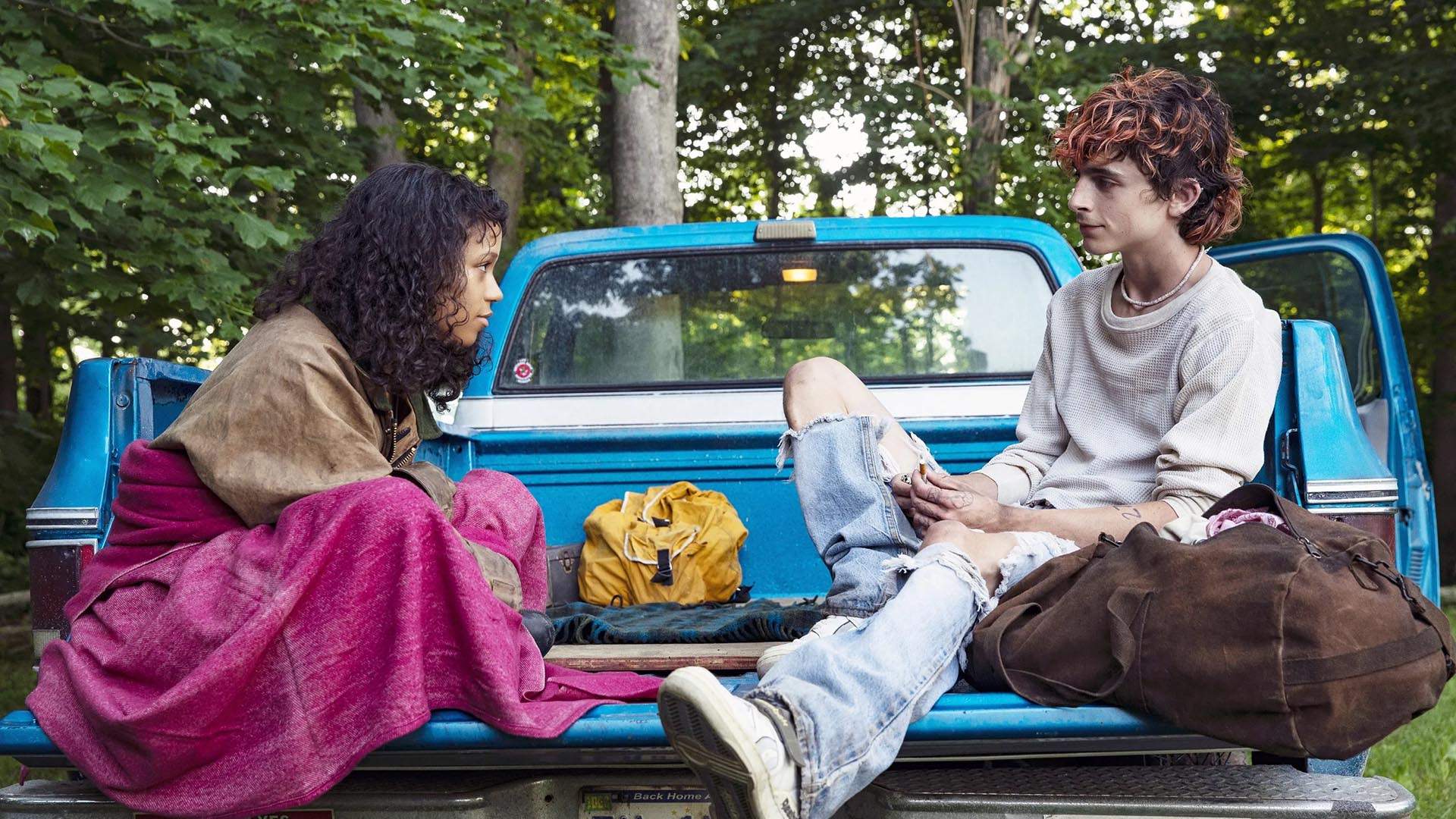 Taylor Russell is given the spotlight to showcase her amazing dramatic abilities in Bones and All. Having been subdued by her father, but also by her inner demons, Maren is a quiet and soft-spoken character, and Russell is able to bring an immense amount of subtlety through physicality and facial expressions that immerse you into the world of a teenager coming-of-age in an incredibly extreme and heightened way. As Maren begins to emotionally open up more in her relationship with Lee, the delivery of beautifully scripted monologues round out a fully realised character.

As always, Timothee Chalamet is a scene stealer, playing arguably his grungiest character yet. There is a charming dirtiness to Lee, who is identified as an ‘eater’ in his introductory scene. Coherently mumbling through scenes of confident dialogue with a classic mid-Western American drawl, Chalamet once again lets him loose in the soul of his character, and the wild world of this film.

The standout of Bones and All is undoubtedly Mark Rylance, who plays a drifter-like ‘eater’ named Sully – in fact, the first ‘eater’ Maren meets on her journey. Rylance juggles multiple tones, including threatening, oddly caring, unsettling and ominous. Sully is immediately a character that seems untrustworthy, but his ability to smell Maren out and not judge her cannibalism outright, forces her into a bond with Sully as somewhat of a shaman in her journey of discovery. 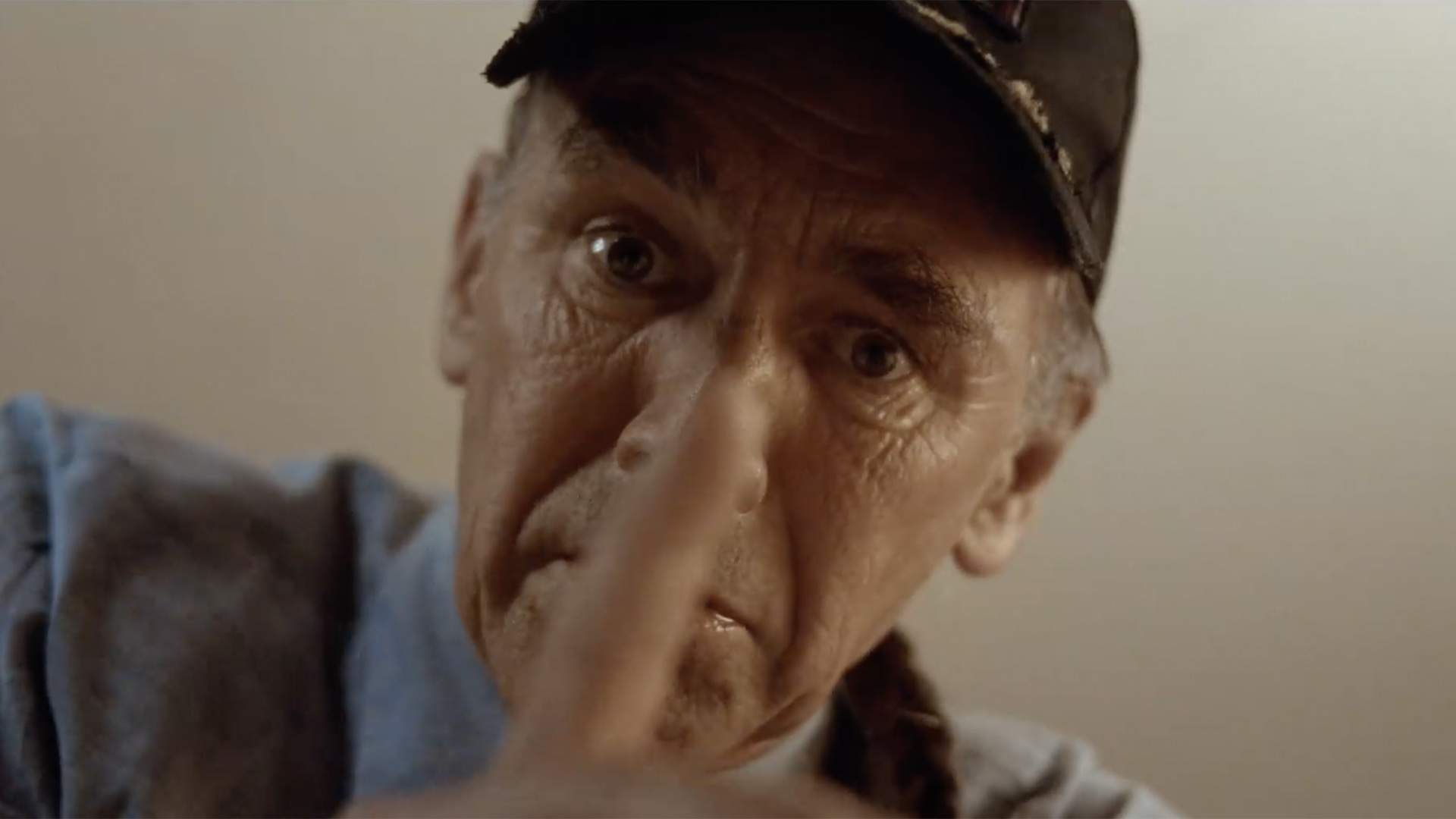 There are so many more positive aspects within Bones and All outside of the aforementioned elements. It’s a beautifully shot film that’s constantly visually engaging, and the score from Atticus Ross and Trent Reznor is outstanding. The major flaw with the film is its uneven narrative. The film’s pacing ebbs and flows in a way that struggled to hold my attention at times. It’s a patient film, taking time to let Maren really discover herself in the film, and take the audience on that ride. However, at 130 minutes long, there are moments and story arcs that felt like they could’ve been left to the side without causing any detriment to being invested in these characters and this story. Ultimately, what plays out in the middle act of this film is a series of vignettes following Maren and Lee on their cross country road trip that don’t necessarily propel the story along. And while it does grant more access into their world, the connection that grows between them does halt at some points, slowing the film down noticeably.

Bones and All almost does the impossible by making a story about cannibals falling in love as grounded and emotional as it is. But, that’s what Guadagnino does best. He makes the audience realise that it’s not about cannibals, it’s about real people falling in love… who just so happen to be cannibals. While it may sit lower down in Guadagnino’s filmography, compared to his other works, it’s his fantastic filmmaking, along with phenomenal performances from Russell, Chalamet and Rylance that immerse you fully into this heartfelt story, set in a crazy, heightened scenario.

Bones And All is in cinemas November 24, thanks to Warner Bros.